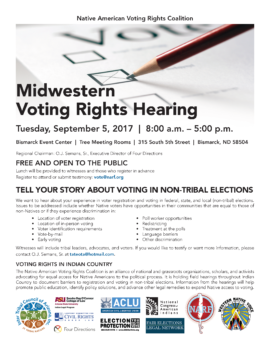 n January 2015, NARF proposed an ambitious new project: gathering voting rights advocates, lawyers, civil rights experts, and tribal advocates into one room to discuss current problems with voting in Indian Country and begin to develop solutions to these problems. Previously, individuals and organizations working to protect Native voting rights did so independently, with no coordinated strategy in place. Often, the work was reactive—in response to an immediate threat—rather than proactive or planned in advance of an election. That is what NARF’s project was meant to change. Thus, the Native American Voting Rights Coalition (NAVRC) was formed.

The project’s main goal is to remove barriers to Native American voter registration and voting, increase Native civic engagement, and foster a more informed and active Native electorate. With mounting evidence of voter suppression and violations of voting rights laws, NAVRC has accelerated its work.  This work includes: (1) planning for redistricting related to the 2020 census; (2) addressing violations observed in the 2016 elections; and (3) overseeing the largest survey of Native voters ever conducted to discover the state of voting in Indian Country.

This form needs Javascript to display, which your browser doesn't support. Sign up here instead

Thank you to our generous funders & sponsors